As far as console exclusives go, Sony’s Playstation 3 had been left short-changed at the start of its product life cycle. The Xbox 360 has timed exclusives on the Call of Duty and Grand Theft Auto franchises’ DLC, plus the hugely successful cash cow that is Halo. Game over wouldn’t you say for competition?

The wise-cracking hero with a skill for surviving collapsing temples, crashing air planes and sinking ships has sold 13 million copies worldwide as of writing this article, and doesn’t show any signs of slowing down. Uncharted 3 doesn’t start as epic as the previous title’s climbing-up-a-train-hanging-over-the-side-of-a-Tibetan-mountain set piece, but once it escapes London you barely have time to take a breath.

After London, the action hops around the world more than any James Bond outing would.

[one_third content_align=”left”]
Rooftop chases in Cartagena, fighting your way out of a burning château in France, escaping a sinking cruise liner off the coast of Yemen, falling out of a ripped apart plane over the Arabian desert, and leap-frogging out of a crumbling temple.
[/one_third]

The third instalment introduces a one-on-one melee combat system in the form of a dodge and counter attack option. Whereas the first 2 had a signature melee move, this edition takes hints from Batman: Arkham Asylum whereby you can engage enemies in a hand-to-hand fight instead of merely taking them down on the move. It’s nowhere near as fluid or polished as it’s Batman aspirations and at times is the sole reason the game falls a bit short. However, the system almost redeems itself come the second half of the game once the player is familiarised with it’s clumsy button mashing melee combat and rewarding action set pieces. 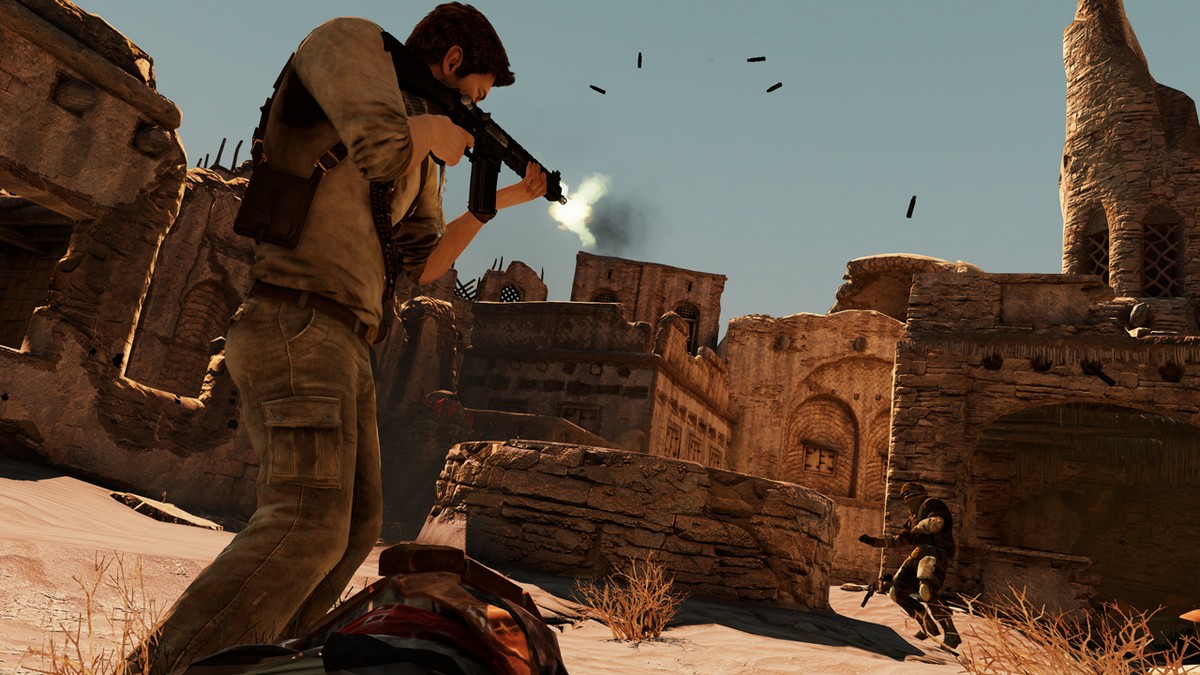 [one_third_last content_align=”left”]
The plot is akin to the previous instalments (and Indiana Jones movies) whereby there is a “maguffin” that drives the story. It doesn’t feel as satisfying but nicely links back to Sir Francis Drake; a key element in the story of the first game.
[/one_third_last] As always there’ Sully to rescue and Elena as Drake’s love interest, plus other excellent supporting voice cast members who help raise the video game bar. In its own way, it’s plays as a better interactive movie than L.A. Noire set out to be by having a much more engaging blockbuster experience and variety in it’s locations.

Graphically, Naughty Dog push the PS3 to it’s limits every time and the lighting effects make the game look absolutely beautiful. It’s hard not to pan the camera around in the desert to admire the sun on the horizon or crevices in the sand dunes. Even how Drake interacts with walls as he brushes past them and holds up his hands; it’s the little things and attention to detail that make the game’s atmosphere impressive and increase the re-playability. It’s a flagship game that’s key to the core power potential of the PS3. There’s rumours of the next-gen consoles tipped for the end of 2012, but I feel it would be a real waste given that the true potential of the PS3 has only been realised with it’s exclusives. Imagine a Grand Theft Auto with the graphical power Naughty Dog has achieved, or a Fallout with that of Killzone. Surely, the console world would be a prettier place?